On the morning of May 21, 2019, my trusty 13-year-old MacBook Pro 17″ laptop refused to wake from its slumber. I can’t really blame it: I’d dragged it all over the US, parts of Canada, and across the Atlantic to England and Denmark, banging it around in backpacks and bags on planes, boats, trucks, motorcycles, and miles and miles on foot. It had been upgraded to maximum RAM back in May of 2014 and had finally reached the “I just can’t do this any more” point.

Poor Macky. I loved that machine. Its timing wasn’t the best, though; I’ve been out of contract for a while, so there’s not a lot of money coming in, and I was in the middle of rather-delayed taxes, as well as a revision and a bunch of organizational stuff for the Northwest Chapter of Mystery Writers of America (of which I am the current chapter President.) When Macky went comatose, it took my work with it to Limbo.

It’s remarkably trick to buy a new computer when all the stores are locked down or doing business only via online ordering when one has only a cranky, aging cell phone and an even crankier, older tablet. But I persevered, did the research, put in an order, and received a refurbished Mac Mini on the Tuesday after Labor Day. I’ve been getting it up to speed ever since.

Being me, I forgot that a tiny desktop computer doesn’t have all the peripherals that a laptop has, so I didn’t order a monitor or a camera, or a mouse, or a keyboard, or a backup drive…. The latter 3 I have, but I had to go out and wander around my small, rural county in search of a monitor for about 3 hours until I found what I believe to be the last sub-32″ flat computer monitor in the county.

Good thing some government person sent me a check. Too bad it’s all gone so soon. But at least I’ve been doing my bit to stimulate the economy… of computer and peripheral vendors.

Now I just have to get a new web cam, because I think Mr. Kat has noticed I stole his… 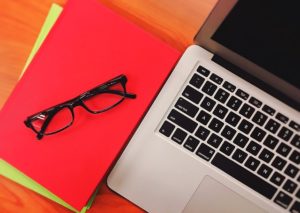